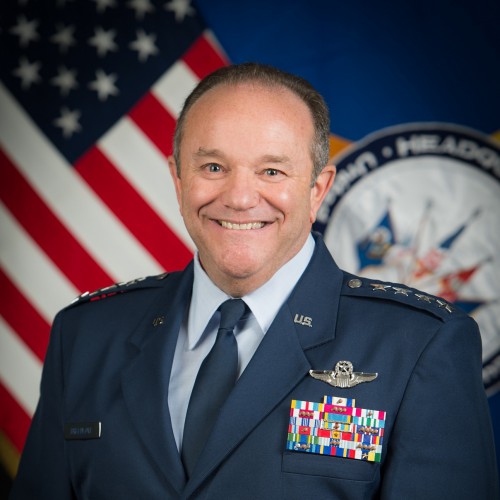 Philip Mark Breedlove (born September 21, 1955) is a four-star General in the United States Air Force who serves as the Commander, U.S. European Command, as well as the 17th Supreme Allied Commander Europe (SACEUR) of NATO Allied Command Operations. He previously served as the Commander, U.S. Air Forces Europe, which he concurrently served as Commander, U.S. Air Forces Africa, Commander, Air Component Command, Ramstein, and Director, Joint Air Power Competence Center. He previously served as the 36th Vice Chief of Staff of the United States Air Force from January 14, 2011, to July 27, 2012. On 10 May 2013, in a ceremony in Stuttgart, Germany, Breedlove took over the command of USEUCOM. Three days later, on May 13, 2013, he assumed command as SACEUR.
On 11 March 2016 NATO’s Atlantic Council designated US Army General Curtis Scaparrotti as Breedlove’s successor.

Starting in May 1993, Breedlove was the commander of the 80th Fighter Squadron at Kunsan Air Base, South Korea. This position lasted until July 1994, when he became a student at the National War College, Fort Lesley J. McNair, Washington D.C.. In June 1995, he became the operations officer, United States Pacific Command Division, Joint Staff, The Pentagon, Washington D.C., where he stayed until June. That next month, he became commander of the 27th Operations Group, Cannon Air Force Base, New Mexico. In June 1999 and going to that next May, he was the executive officer to the Commander, Headquarters Air Combat Command, Langley Air Force Base, Virginia. For the next year, he was the commander of the 8th Fighter Wing, Kunsan Air Base, South Korea. Beginning in June 2001 and lasting for the next year, he was the senior military assistant to the Secretary of the Air Force, Headquarters United States Air Force, Washington D.C.